Phi Beta Kappa, founded at the College of William and Mary in 1776, recognizes “intellectual capacities well employed, especially in the acquiring of an education in the liberal arts and sciences.” (Phi Beta Kappa Handbook)

Membership is universally recognized as a distinct honor.  Case Western Reserve University’s chapter was chartered in 1847 as the tenth chapter in the country and the first west of the Alleghenies. It is one of 283 chapters established at American colleges and universities.

From among the highest achieving undergraduates pursuing College of Arts and Sciences degrees, the Case Western Reserve University chapter, administered by faculty and staff who are members of Phi Beta Kappa, elects no more than 10 juniors and 50-60 seniors and January graduates to membership each year. Juniors, seniors and January graduates honored by membership in Phi Beta Kappa are listed in the Commencement Program book.

Welcome to the 2018 inductees to CWRU, Alpha of Ohio, Phi Beta Kappa

How to find legitimate honors societies?

Phi Beta Kappa Secretary/CEO Fred Lawrence provides comment in a USA Today article that discusses how students can distinguish among honor societies and answer the question -- legitimate or not?

The importance of Phi Beta Kappa 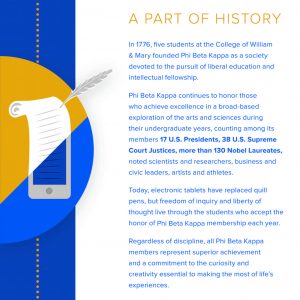